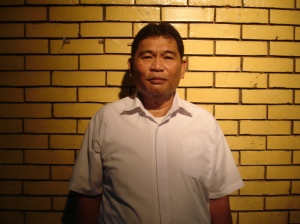 There is a tradition in Filipino end-of-bar-exams called “salubong” where family, friends, and schoolmates of law graduates who took the bar exams meet the examinees and congratulate them. There’s much cheers and revelry to celebrate this event.

Bro. Johnny Apolinar was among those who were outside the De La Salle University (where the bar exams took place) waiting for the examinees to come out. He positioned himself among the students of Ateneo, San Beda, and University of Sto. Tomas. His son, a law graduate from UST, was one of those who took the bar exams. With his camera ready, Bro. Johnny thought that his position was perfect because it is where the examinees will pass and he could easily see his son. But then, the policemen came and ordered them to transfer and move back. By the leading of the Holy Spirit which Bro. Johnny readily obeyed, he left the place altogether and positioned himself instead atop a plantbox near the LRT Vito Cruz Station.

After about 1 or 2 minutes, Bro. Johnny heard a very loud explosion that rocked the whole area. He got down and went to the place where the explosion occured and there he saw injured and bloodied people scattered in the area where he was earlier positioned! A fragmentation grenade caused the explosion, and in just a matter of minutes, Bro. Johnny saw policemen carrying the injured (at least 50 people were hurt mostly students), one with missing legs, and placing them at the side of the road while waiting for ambulances.

Bro. Johnny was so shocked to see such a catastrophe where he could have been one of those injured. He realized how God has saved him from such a tragedy! He praised and thanked the Lord for His great goodness.