In 1995, Sis. Alona Giducos was desperate. She had separated from her husband and she and her husband had divided their four children equally between them. She didn’t want it to end up like that, but there wasn’t anything she could do to save their marriage. Her husband was a drug addict and a drunkard.

There she learned that her mother had been saved. Her mother had accepted the Lord Jesus Christ in her life and was faithfully serving Him. She shared the Gospel to Sis. Alona and invited her to the worship service of the JESUS MIRACLE CRUSADE INTERNATIONAL MINISTRY.

Sis. Alona was desperately looking for peace in her life, she hoped that this would be the answer to her prayers. She accepted the Lord Jesus Christ in her life as her Lord and Savior and later on, was baptized in water in His name.

Immediately, Sis. Alona received the precious peace that she had been desiring. After a month of fervently attending worship services, she and her husband reconciled and their family was restored. Her husband’s life was changed completely and their whole family began to serve the Lord faithfully.

The following year, Sis. Alona conceived and gave birth to their fifth child, a son she named Isaac. She didn’t know then that God would use this child to show her His great miracles.

A month after baby Isaac turned one-year-old, he got sick of measles. Having had no vaccine, the baby suffered from the illness greatly. For three weeks he had fever and convulsions. Sis. Alona prayed hard everyday, laying her hands on him every after praise and prayer, but the child wasn’t getting better.

One day after prayer, Sis. Alona decided to bring her child to the Philippine Children’s Medical Center. The doctors there acted quickly to save Isaac, for his eyes had rolled back in his head and he was unmoving. They tried hard to revive him, but he didn’t make any movement or showed any reaction.

Sis. Alona prayed and surendered everything to the Lord. She vowed that she would continue to serve Him faithfully no matter what happens to her son. It was then that her child made a movement and began to breathe normally.

Because of this, the doctors in the hospital, and even the janitors, called Isaac a “miracle baby”, for so he really was.

But after several neurological tests, the doctors found out that Isaac had sustained severe brain damage due to his prolonged fever. Because of this, he became blind (totally no vision), deaf (and mute because of this) and lame. He became a vegetable. He also forgot how to suck his milk bottle. He was fed in the hospital via a feeding tube.

Sis. Alona didn’t know what to do, she was crying in helplessness. (During all this time, her beloved husband and their other four grown children continued to serve the Lord, diligently attending services and praying and begging Him to heal Isaac).

Sis. Alona remembered all the teachings of the beloved Honorable Pastor, Evangelist Wilde E. Almeda, to have FULL FAITH in the Lord and never doubt. The following mid-week service, she attended service and brought with her a picture of Isaac. She approached the beloved Hon. Pastor Wilde E. Almeda and he prayed over Isaac’s picture.

The next day, while she was praying beside Isaac’s bed in the hospital, she heard a voice say, “Your sons’ brain damage has been healed.”

And so it was, that Isaac began to respond and to feed on his milk bottle. When they left the hospital, he was still blind, deaf and lame, but it didn’t take long and he gradually turned back to normal and fully recovered – his vision, speech, hearing and walking.

When Isaac was a little older, he joined the Children’s Choir and sang for the Lord for many years. Now he’s fifteen-years-old and has no traces of his childhood illness whatsoever.

Sis. Alona and her whole family continue to serve the Lord faithfully to this day.

Sis. Dina Gultiano sings in the Jesus Finest Generation Choir of the JESUS MIRACLE CRUSADE INTERNATIONAL MINISTRY. Together with her family, they serve the Lord faithfully.

But in May 2010, a very difficult trial came to their life that Sis. Dina thought they could not make it through. But however hard it was, they held on to their faith more tightly than ever and trusted completely in the merciful God.

Her 7-year old daughter, Janna, contracted measles and was sick for several days. Despite their fervent prayers, the girl’s condition worsened. She became motionless and could no longer open her eyes.

Ever since Sis. Dina was saved in 1992, she embraced the teaching of the church that the Lord Jesus is the One who heals all our diseases, and thus, has learned not to rely on medicines and doctors. But her unsaved sister insisted that they bring Janna to the hospital if only to find out what was ailing her. Sis. Dina eventually relented.

The first four hospitals that they went to didn’t want to admit Janna. When they went to the fifth hospital, they were given a referral to San Lazaro Hospital, a large government hospital.

Janna was admitted in San Lazaro Hospital. The next day, she was comatose and didn’t make any movement at all. Oxygen was given her to help her breathe. After some tests were done, doctors found out that Janna had a viral infection in her brain. 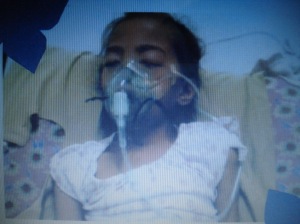 Janna in the hospital. Did not wake up for 4 days.

After five days in the hospital, the doctors admitted that there was no hope for Janna. They offered to put a tube in her lungs just to help her breathe easier (although the doctors said there’s no 100% assurance this could help her for long). Sis. Dina declined. But she continued to pray agonizingly that the Lord Jesus will heal her beloved daughter.

By God’s mercy, Janna awoke from coma but she was still unmoving. On their fifth day in the hospital, a sister-in-Christ came to visit. She strongly reminded Sis. Dina to affirm her great faith to the Lord Jesus. She said that if the doctors could no longer do anything to help her, why not take her out, surrender everything to God, and trust completely in His power? Actually, this was exactly what Sis. Dina was waiting for: a strong reminder from a co-believer. Right then and there, she was strengthened and made a firm decision. They will leave the hospital the next day.

Just looking at her daughter’s condition tore Sis. Dina’s heart to pieces. But she mustered all courage and put everything in Jesus’ hands. They left the hospital and headed for the fasting house in Sauyo, Novaliches, Quezon City, to seek for a miracle. (In the fasting house, praise and worship takes place early in the morning through early afternoon, then it resumes in the early evening until before midnight).

At the Sauyo Fasting House. Janna was forced to be fed with soup.

For almost two months, they lived in the fasting house. Sis. Dina lovingly took care of her daughter. She called her daughter’s condition a “living corpse”. Her skin clung to her bones. There was almost no flesh left in her. Fasting brethren prayed over her and laid hands on her.

Around July, Janna was brought to the worship service in Amoranto Stadium and there she was laid hands on by the beloved Hon. Pastor Wilde E. Almeda. Before this, her whole body was very painful that just a gentle touch made her wince. But after being laid hands on, the pain instantly left and she was able to move her legs, and then slowly including her body.

September 3, 2010 was a day Sis. Dina will never forget – it was the day her beloved daughter arose and walked. The Lord Jesus has completely healed Janna! (At this point in Sis. Dina’s testimony in the pulpit, she was filled with the Holy Spirit and her body shook uncontrollably while uttering incomprehensible words of praise).