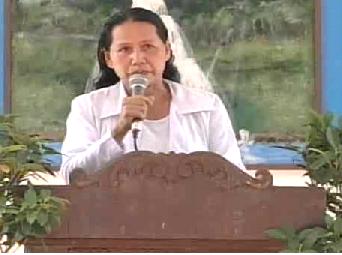 Sister Rose Batoon has been working as a domestic helper abroad for years. In 2008 after a short vacation, she returned to work in Kuwait. But as early as February, she was afflicted with incessant bleeding. She tried to keep this from her employers and went on with her work. But her bleeding continued and she was becoming weak, so she requested her employer to bring her to the doctor. The doctor told her it was probably menopause since she was at that age.

In November of the same year, as her bleeding continued on and off for days on end, Sis. Rose was invited by her employer’s mother to cook for a special occasion. She was brought to their farm. But it was very cold that day and her bleeding intensified. Her employer noticed her weakness and asked if she was alright. Sis. Rose answered that she could still carry on with the work. But at the end of the day, her employers brought her to the doctor. She was worried with Sis. Rose’s condition.

Sis. Rose underwent ultrasound and it was found out that she had a cyst growing in her right ovary. Fear enveloped her as she thought of surgery. Her employers decided to have her cyst removed via surgery, but Sis. Rose refused, asking who would take care of her. Her female employer volunteered to take care of her after surgery, saying she would take a 2-week leave from work. But Sis. Rose insisted that she didn’t want to undergo surgery.

She continued to pray and trust in the Lord. After the first check-up as her bleeding continued, she was again brought to the doctor. But this time, the doctor said that she needed not undergo d and c because her bleeding wasn’t that strong at that time. Sis. Rose was so thankful.

During her employer’s trip to Egypt where she accompanied her, she continued to bleed everyday but the Lord strengthened her.

At last, her contract was finally finished. She came home to the Philippines and attended worship service in Jesus Miracle Crusade International Ministry as she used to. Then she sought to be prayed over and laid hands on by the beloved Hon. Pastor Wilde E. Almeda. After the laying on of hands on her, Sis. Rose felt relief. She felt inside her that she had been healed.

A few days after this, Sis. Rose had a discharge. She believed that the Lord Jesus had finally removed all that was causing her bleeding. And indeed, her bleeding stopped permanently. After about 2 months, she went to the doctor to be examined. Ultrasound results showed that her cyst was shriveling up and the doctor said she had nothing to worry for this would ultimately dry up.

It’s been years since Sis. Rose had received complete healing from the Lord and she continues to work abroad to this day.