Bro. Rey Avila testifying in the pulpit at JMCIM – Main.

When you hear Bro. Rey Avila testify about the harrowing trial that he and his siblings had to endure for so many years, you can’t help but be deeply moved. His voice cracks as he relates what they had to go through, until tears silently fall down his cheeks, accompanying the painful memories as he recalls each one for the praise and glory of God.

Bro. Rey Avila, together with his three siblings, had a severe skin disease from birth. Growing up in a poor family in the province of Bicol, they resorted to different quack (witch) doctors to find cure for their worsening skin disease that covered their whole bodies.

They were told that they were cursed and the witch that did this evil is dead, leaving the statement: “It’s the children who will suffer the sins of their parents.”

The diseased children also tried herbal remedies to no avail. They weren’t getting better no matter how religiously they followed the “albularyos” (herbalists) instructions and “cures” in their province. 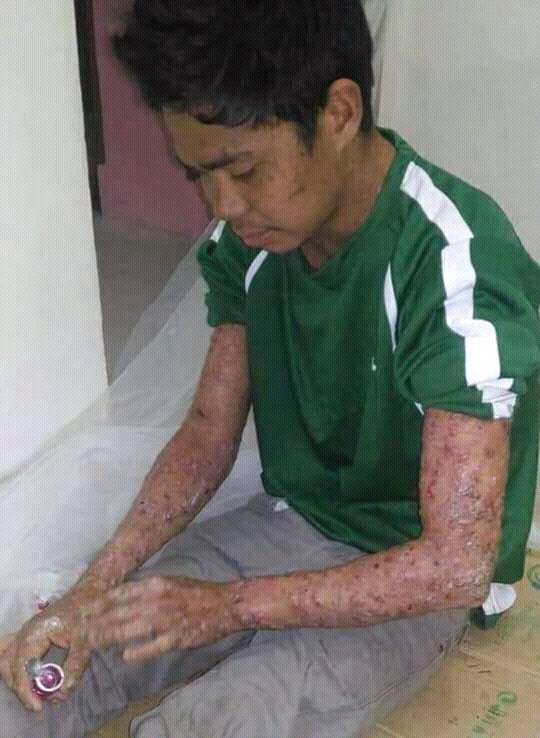 Photo of Bro. Rey while suffering the dreaded skin disease.

Their parents transferred them to the province of Cavite. By this time, they were teenagers and their skin disease was getting worse. The house they lived in Cavite had no electricity. In the morning, they would see their clothes soaked in blood from the open wounds all over their bodies. Blood oozed from these wounds that blanketed every part of their skin. Their sleeves that clung on their thin arms were soaked in blood.

Eventually, GMA 7, a prominent TV station, came to know of their plight and helped them. Their story was aired in Kapwa Ko, Mahal Ko. Bro. Rey and one of his brothers were brought to St. Luke’s Medical Center and there, they were examined by one of the country’s top dermatologists. They underwent numerous laboratory tests and biopsies.

They were also shown in Brigada Siete. The show also helped them and had them examined in different hospitals in the country, such as Jose Reyes Memorial Medical Center and RITM (Research Institute for Tropical Medicine).

Samples of skin, blood, nail, and hair were taken from them in RITM. These samples were sent abroad for thorough analysis. After one year, the results finally came in. All four siblings were called to RITM. They had very high expectations, believing that the medical specialists  had finally found a cure for their disease.

The results showed that they all came out positive in the disease called “epidermolysis hellosa”, a kind of disease that had no cure and will carry it until their old age. This news hit them so badly. They were now without hope.

Many dermatologists and the media were present when the name of their disease was announced. They were informed that they would suffer the disease their whole lives.

At this point, they lost all hope in God.

Throughout the many years that they had carried and suffered the abhorrent disease, they had prayed assiduously. Twenty-four long years of sickness and suffering with agonizing prayers, and now, what? The bitterness that gripped Bro. Rey and his siblings choked what little hope remained in them.

Ever since they were little, they had been mocked and trodden down. They rarely went out of the house. Now that they were grown-ups, it was no different. They lost all courage and hope and just stayed inside the house, feeling miserable and depressed.

Bro. Rey lost his faith in God. In his despair, he became angry at God.

Their life was all sickness, suffering, and depression they wanted to die!

GMA 7 contacted them again for follow-up check up but they didn’t respond anymore.

Their disease worsened, all four of them, no one was spared. The whole house stank of the issues that oozed from their numerous wounds, blood and puss and perspiration mingling together for they couldn’t take a bath. Bathing was a torture because of the open wounds, blisters, and new ruptures all over their bodies that they gave up bathing altogether.

They slept most of the time because their bodies hurt and they were becoming weak. Their father became angry at them and despised them, telling them that they had become useless and invalids.

Because of the hurtful words of their father that cut deep as much as the disease that ravaged his body, Bro. Rey fled their home. He reached Sta. Rosa in the province of Laguna. He slept in sidewalks, basketball courts, the cemetery. Someone saw him and brought him to the barangay hall rescue team which in turn turned him over to DSWD (Department of Social Welfare and Development) Bahay Kalinga.

But even Bahay Kalinga couldn’t fold Bro. Rey into its embrace, fearing that he might infect the other children housed there. The barangay hall representative had to bring him back with him and put him in a newly-built toilet. So he was there until an employee saw him and took his pictures which she posted on Facebook.

A brother from JESUS MIRACLE CRUSADE INTERNATIONAL MINISTRY saw the post  and immediately messaged him and invited him to attend the 8th anniversary of JMCIM-Sta. Rosa Outreach. He accepted the invitation and on May 6 (year to be confirmed), he accepted the Lord Jesus Christ and was baptized in His name.

He thought that being immersed in the tub of water would hurt him as he had lesions all over his body, but he was wrong. That same night, he slept soundly. Hallelujah!

In the morning, his clothes were soaked again because the blisters had all erupted. But within a few days, his wounds began to dry up and in just a few months, Bro. Rey received complete healing from the Lord Jesus Christ through the faithful and unceasing prayers of our dearly Beloved Hon. Pastor Wilde Almeda.

Now, he testifies with tears, that God is not deaf nor blind to our deepest needs. He now works as a security guard and uses his salary to attend crusades in different outreaches.

THE HIGHEST PRAISE, HONOR, THANKSGIVING, AND ALL THE GLORY TO GOD ALONE – OUR DEAREST LORD JESUS CHRIST!